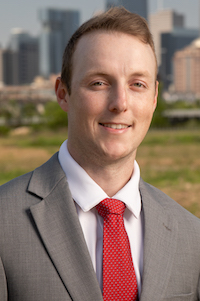 Austen Smith works as an associate attorney for Clouthier Law, PLLC. Prior to joining Clouthier Law, Austen clerked for a plaintiff’s civil litigation firm and gained valuable experience in commercial litigation, medical malpractice, products liability, and multidistrict litigation. Austen graduated from the University of Houston Law Center in December 2020 and became licensed in Texas shortly thereafter. During law school, Austen competed on the Moot Court Team which enabled him to learn the appellate process. He became interested in appellate practice when he participated in the John Black Moot Court Competition, earning a prestigious second place finish. As his passion for appellate law grew, Austen participated successfully in several other moot court competitions. To further his experience, Austen also participated in the Consumer Law Clinic through the Houston Law Center, gaining experience in family law appellate practice. He also was a member of the Houston Business and Tax Law Journal.

Austen completed his undergraduate degree at Texas Tech University in 2016, where he participated as a senator and chair of the College of Media & Communications for the Student Government Association, a student ambassador for President’s Select, and the vice president for the Society of Professional Journalists.

In his free time, Austen enjoys nature, sports, and spending time with family and friends. He also enjoys cooking and travel. Austen has known since high school that he wanted to become a lawyer and has always had a passion for service and helping others. He also regularly volunteers at the Phoenix House.