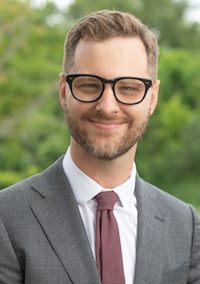 Brian K. Pounds joined Clouthier Law, PLLC as an associate attorney (bar results pending) after graduating Cum Laude from the University of Houston Law Center. While in school, Brian accumulated an invaluable, diverse work history clerking for both a plaintiff’s civil litigation firm, a large construction law firm, as well as prestigious internships for both the Honorable Judge David Hittner of the United States District Court for the Southern District of Texas and Justice Jerry Zimmerer of the Texas Fourteenth Court of Appeals of Texas. Brian’s passion for appeals stems from his time as a member of the University of Houston Moot Court team, where he competed in six interscholastic competitions, only once ranking lower than the quarter finals. Brian was also awarded the esteemed Second-Best Speaker and Second-Best Brief award for his performance during the American Bar Association National Appellate Advocacy Competition. His passion for others has driven him to pursue appellate work on a full-time basis. Brian also participated as a member of the Houston Business and Tax Law Journal, giving him additional research and writing experience. Brian furthered his desire to mentor others when he served as a teaching assistant for both a Federal Civil Procedure and Constitutional Law course at the University of Houston Law Center. Brian received his undergraduate degree in political science from Arizona State University in 2017.

Outside of his legal practice, Brian is an award-winning singer/songwriter in the Austin, Texas area. Brian’s music has been featured on national television programs and publications, including The Voice, and has allowed him to travel throughout the world. In his free time, he enjoys spending time with his wife and daughter and cheering on his beloved Houston Astros from his couch.

Contact Us
Practice Areas
Client Reviews
★★★★★
“Susan has worked tirelessly for years filing appeals on my behalf. Finally her efforts and persistence has paid off. After serving 11 and 1/2 years, I was released from Federal Prison and have been able to return to my family and help once again with raising my children [now age 16]. My family and I owe a debt of gratitude which we will never be able to repay. The love we feel for Susan is immeasurable.” Joe R.
★★★★★
“Our case was complicated and time critical. Susan took charge of the entire process, keeping us updated with texts, phone calls and emails. She worked through a Holiday weekend to make certain our case got the attention and success required to bring our loved one home. It is also very important to know that she has sophisticated research tools, which are IMPERATIVE when you have to navigate through the Appeals process.” Jack H.
★★★★★
“Susan is a thoroughly dedicated professional that has a unique empathy for cases that reveal the misapplication of justice that so often affects those with limited resources. Through her tireless efforts, one of my best friends had six years reduced from his sentence. The family and I will be forever grateful to Susan.” James P.
View More
Submit a Law Firm Client Review
" "