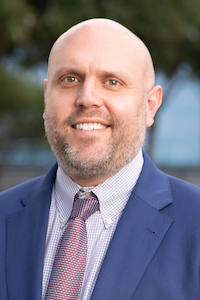 Gage Fender is an Associate Attorney at Clouthier Law, PLLC. Gage loves all aspects of the appellate process and considers this practice to be his true calling as a lawyer. He knows each case presents unique challenges, and opportunities, and he pours all his creative and intellectual energy into each one. He also understands that people usually do not contact the firm on their best day. He understands the toll that the legal process can have on individuals, families, and businesses, and above all else he is dedicated to achieving the best possible outcome for each one of his clients. Whatever your situation may be, Gage is eager to dig in and help sort it out.

Prior to joining the firm in May 2022, Gage worked exclusively as a civil trial lawyer. He began his career working for a national firm defending energy service-companies and major construction outfits. He then joined a boutique litigation firm, where he represented both individual and corporate plaintiffs in a wide variety of different civil actions in both state and federal court. During this time, Gage sought opportunities to work on various appeals, and it was through this that he realized that he wanted to focus entirely on appellate law. When he eventually met the other professionals at Clouthier Law, Gage knew he had found the place he was meant to be.

During law school, Gage interned for two district court judges in the United States District Court for the Southern District of Texas, worked in the legal department of a Fortune 200 energy company, and volunteered for the Texas Access to Justice Commission. He was impressed by how the law touches upon and shapes almost every aspect of a person’s individual and communal life, something that continues to make him passionate about the practice today. This abiding interest in the power of the law is another reason Gage is so committed to the work he does at Clouthier Law. Grounded in the mechanics of appellate procedure and familiar with all the different sources of law, Gage is able to perform outstanding work in the areas of civil, criminal, family, and bankruptcy law and achieve great results for his clients.

Gage prides himself on his legal analysis, writing, and advocacy skills, which have been tested and sharpened in both the trial courts and the courts of appeals. But he also understands that, for the non-practitioner, the legal process often seems like a confusing and frightening maze. So, Gage also prides himself on being relatable and down-to-earth. He is committed to making sure his clients understand what is in front of them and what they can expect when they begin an appeal, and he is also committed to making certain they are informed of each important step along the way.

Gage believes that everyone, no matter their background or current circumstances, deserves dignity, fairness, and respect both in life and in the legal system. He is thus dedicated to providing the zealous advocacy that the firm’s clients perhaps did not receive prior to reaching out to Clouthier Law. He knows that it is a privilege to be able to serve the clients that find their way to the firm, and he takes on this responsibility with the utmost dedication.

When not working on a brief or preparing for oral argument, Gage loves reading, volunteering at his church, and, more than anything else, spending time with his daughter.

Jurisdictions Admitted to Practice The State Bar of Texas, 2013